The D versions of the TurboDrop® nozzles were designed with dicamba, 2,4-D and glyphosate in mind, where a coarser spray is desirable. Between 30 and 90 psi, these nozzles deliver Ultra Coarse (UC), Extremely Coarse (XC), and Very Coarse (VC) droplets for maximum drift control. The air-energized droplets provide better coverage than solid liquid droplets of similar size by increasing the number of droplets in the spray, by accelerating the droplets into the canopy, and by improving the spreading dynamics of the droplets on impact. The D version of the TurboDrop® DualFan has the ability to cover the target from two to four angles of attack to further enhance chemical performance.

The D versions utilize larger pattern tips (without affecting the flow rate of the nozzle) to create bigger droplets. Due to the modular design, it is easy and inexpensive to convert from the standard TurboDrop® to the D version and vice versa, or even to convert from a standard TADF to TDXL-D.

The graphic below illustrates how one single TurboDrop® Venturi has the option of four different pattern tip set-ups, both single fan and DualFan; and standard two-to-one ratio (of pattern tips to Venturi size) as well as D version ratio for even larger droplets. The modular design allows the user to switch back and forth from any of the possible configurations. 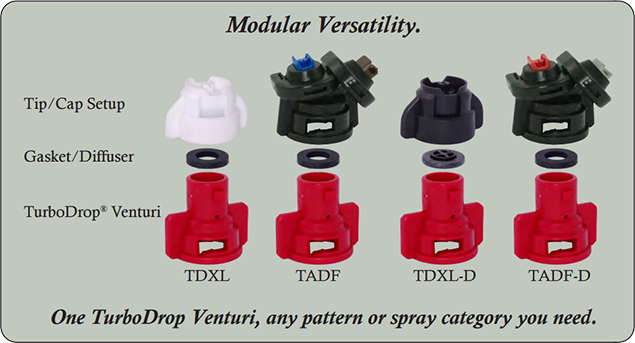 It is important to remember that as sprays become coarser, coverage may be compromised. Choosing the TurboDrop® DualFan and alternating the nozzles on the boom will help counter the potential loss of coverage by effectively spraying the target four times in one pass.

The D nozzles employ proven TurboDrop® Venturi Technology to inject air and create a larger, more uniform droplet spectrum. The pattern tips are larger in comparison to those of the standard XL and DualFan nozzles, which results in a greater pressure drop and a larger overall droplet size.